Frame is the renovation of a penthouse in the Tokyo metropolitan area. Two adjacent dwellings (east and west) were made into one unit for a family of four. In order to make it easier to divide again in the future, and to meet the project’s budgetary constraints, the main construction work was largely confined to the living and dining area of the eastern unit.
Our challenge was determining how to create spatial relationships within the larger new unit with its mix of new space and original, untouched space. Taking a cue from the positions of existing concrete columns, walls and openings, first a rectangular space in the west dwelling was enclosed. It was then reproduced at the same size in the east dwelling rotated 90 degrees. (See the photos and the plan animation). Within the one combined dwelling unit, there were now two rectangular rooms, each with windows and doors of the same size and in the same locations. The newly created eastern rectangle is a living space with a new kitchen; the original rectangle is the studio for the owner's work. The accumulated experience of going back and forth between the two identically shaped rooms in the course of everyday life will bring spatial cohesion to the two newly combined units.

4 Unified version of Irises and the diagram.

Reproducing an existing space in another place is called “utsushi” in Japanese tea culture. The literal meaning of the word is “copy” in English. There have been many examples of teahouse replicas made by later tea masters/enthusiasts since the early modern period. Many of those followers set up the reproductions on their premises and savor tea, while feeling familiar to great tea masters. What we did in the Frame is no different from “utsushi,” if we look only at the actions. However, in “utsushi” of a teahouse, it is safe to say that no copy can be built on the same site or in the same house as the original. Also, of course, the two rectangular spaces in the Frame are not teahouses. Still, could it make sense to mention “utsushi” of a teahouse when describing the Frame project?
If “utsushi” is simply an act that satisfies the desire to own a copy of a famous teahouse and to learn from the spirit of a great tea master, it is difficult to find anything in common with Frame. However, when you see another possibility in "utsushi", that is, when you see making "utsushi" also as an effort to expand space by building a spatial relationship with the original that exists in a different time and place, touching here would not be so far-fetched. At least, if you know that the great artist of the Edo period, Korin Ogata (1658-1716), had also done “utsushi” of a teahouse, you would be surprised and never be able to dismiss this view. This is because he is said to be the first painter to attempt isomorphic repetition in the world of folding screen paintings.
Needless to say, that folding screen is Irises, one of Korin's masterpieces (Fig. 1 and 2). It is a pair of large, six-panel folding screens on the left and right, each 150.9cm x 338.8cm. Only irises are depicted on the gold background. There are no other elements. The two screens have the continuity of the images, but at the same time, the viewpoints and distances to the objects are completely different. One feels like they are looking at two different, independent pictures.
What is of interest to us here is the repetition of the same pattern seen in the left and right screens respectively. In the right screen, the group of flowers drawn on the upper right (the first and second panels from the right) is repeated exactly at the left in the center of the screen (the fourth and fifth). And in the left screen, the flower group at the lower right (the first and second panels) is repeated on the adjacent panel in a higher position (the second and third)(Fig. 3 and 4). In other words, a copy and an original coexist in the same space.
However, according to what art historian Kazuo Kosugi pointed out with wonder, the repetition in this painting was produced using templates by applying the stencil technique for dyeing fabric. Based on the importance should be placed on the meaning of the same pattern appearing twice on one screen rather than the relationship between the original and the copy. When an observer notices this repetition, the spatial connection within each screen emerges by itself.
These screen paintings stand on their own folds. They are not flat surfaces, but rather are displayed in a zigzag state with mountain and valley folds. For example, in the case of the same group of flowers in the right screen, one is painted across the valley fold and the other across the mountain. Therefore, spatial relationships can be seen not only left and right, but also in the depth of back and forth; one stands back and the other forward. In the case of the left screen, the same two groups of flowers are adjacent across the mountain fold; after you look beyond that fold, as if turning a street corner, you might see the familiar pattern again.
Awareness of the repetition also evokes the idea that Irises is not only the representation of flowers, but an attempt to compose the limited screen on the basis on a certain intrinsic order. In addition, what connects the two screens with different viewpoints as one piece is the common repetitive pattern seen on both the left and right screens. 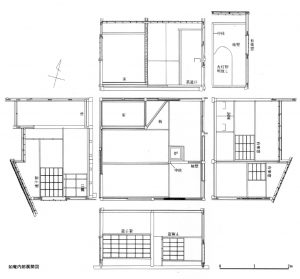 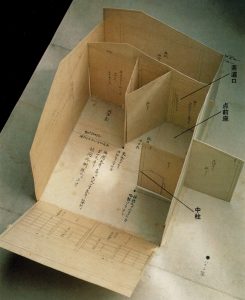 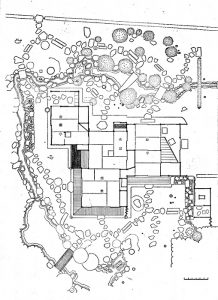 Now then, Korin made a “copy” of Joan, which was already popular as one of the great teahouses at that time. This was probably before Irises had been drawn.
Joan is a teahouse created by Uraku Oda (1547-1621), a younger brother of the powerful warlord Nobunaga Oda and disciple of Rikyu Sen, the greatest tea master in Japan, when he built a new residence for his later years in 1618 (Fig. 5). Joan is a unique teahouse with Uraku's ingenious ideas, such as the old lunisolar calendars on the walls, windows filled with bamboo, and so on. Above all, what best highlights his spatial sensitivity was the small triangular area of floorboards, the result of positioning the sidewall of the alcove diagonally. It is generally said that it was done to make serving easier for a waiter. What should be pointed out here, however, is that behind the triangular floor there exists a hollow space shaped like a triangular pillar (Fig. 6). It is not a closet; it serves no pragmatic function. It is an enclosed void space and you cannot peek inside. Tea houses in Japan are wooden buildings, and with their walls so flat compared with stone or brick buildings, it was not unusual to move or store them disassembled. They are, as it were, an architecture made 3D by enclosing space with 2D wall panels. Imagine folding drawings. The presence of the 3D hollow, triangular space therefore looks quite peculiar in a simple tea house, but this will be discussed at another opportunity.
Uraku's Joan was originally built within the precincts of Shoden-in Temple in Gion, the eastern part of Kyoto. Although it had a minor move, it had been located in the vicinity of Gion until the Mitsui family bought it in 1908 and transported to Tokyo. The teahouse of Korin has been in Kyoto as well, but it is said that it was first sited in front of Ninna-ji Temple in western Kyoto, far from the city center (Fig. 7). That is to say, the distance between the two is great. However, when Korin put his teahouse on the site, the distance collapsed at once, and the Kyoto map in his mind must have been updated. As it was possible to actually go back and forth within one day, it would have been possible to sit in the “utsushi” teahouse just after visiting “Joan” (Fig. 8).
Repeating the spatial experience of Joan within a limited area of Kyoto dilutes the difference between the original and the copy, shifting the emphasis to the significance of the two teahouses existing in the same city at the same time. In other words, it encourages the acquisition of spatial expansion, a characteristic inherent in “utsushi” as described above.
Two identical teahouses in one city; two identical patterns of irises on one screen; two identical rectangles in a penthouse.